As gaming has become more mainstream, more new ideas and places have been popping up to accomodate this demand. A few days ago I went to London to check out some places. Here's a quick guide to some places related to gaming!

Back in the day Arcades where the only option if you wanted to go out and play some video games with and socialise. In my earlier years its where I'd hang out and where I met a lot of friends. These days, its a dying breed. Coined machines have been put to the sidelines as being side entertainment to bowling alleys and cinemas etc.

This humungous building was once the biggest Arcade in Europe, with five floors of machines. You would take a very long escalator up to the top, and spiral your way down to the bottom. Every game was there under the sun, from sports games, punching bags, music games, dance machines, and fighting games. Even bumper cars and a pool bar! 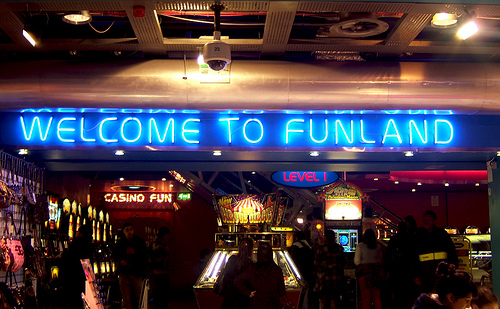 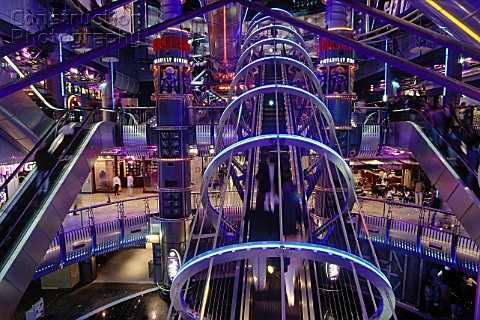 But as the years went by, floor by floor it closed down, until all that remained was the basement floor underground walkway to Picadilly Circus, which doubled up as an open dance space. Rumours of management problems and the new owner having no interest in keeping it alive led towards its demise until it was finally sold off for a Tokyo style Pod Hotel.

Close by to Troc, there is a smaller arcade place. Upstairs, 18s+ gambling machines but downstairs a more informal style and arrangement of machines and pool tables.

One of my friends managed to get a job there and turned the place around. It probably wouldn't be around today, if not as good. Typically, its someone's passion of arcade games is what keeps it alive! Extra games, imports from Japan, tournaments, wifi, and a more friendly atmosphere keeps loyal regulars coming back making it their "local". I was informed that the rent prices have been hiked by 50%, sadly feel that this place wont last because of that soon. 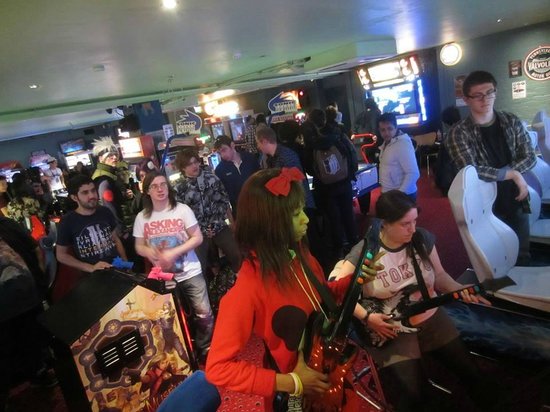 This mini Troc has managed to survived thanks to its location being so close to the London Eye. Inside this maze like building has many arcades, bumper cars, and games where you exchange tickets won for prizes. I don't even know how many of these exist anymore! Enoy spending £10 on games to win a pencil! Woohoo!

Further downstairs is more arcade games, a sports bar with big screen, some pool tables, and the newest most unexpected addition... rental table tennis tables! (Ping pong to you Americans). The first I've seen in London, but I wouldn't be surprised if there were other places that had some already. 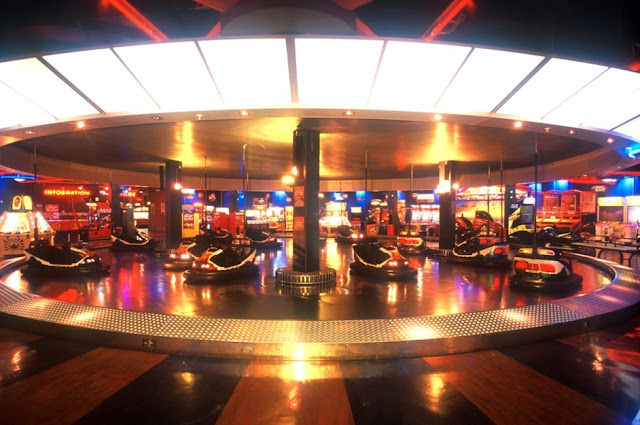 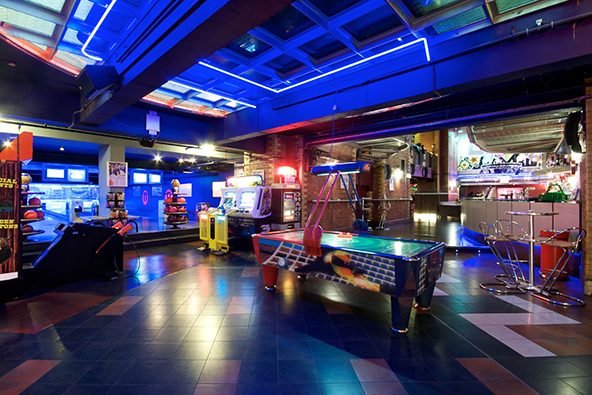 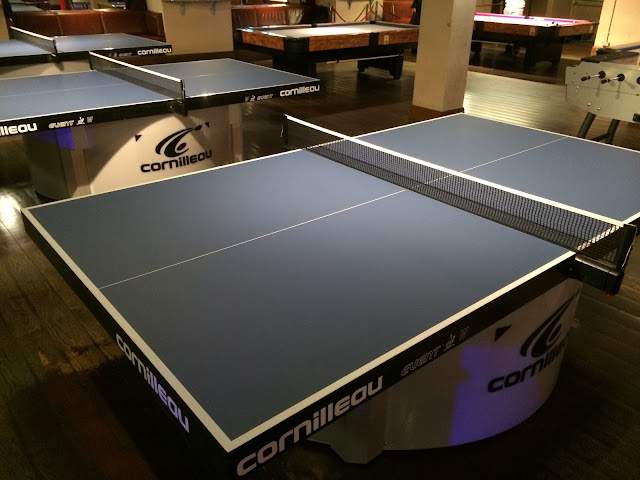 The timing of these kind of social places related to gaming is no coincidence. Us young arcade go'ers have all grown up and are catering to that demographic of nostagic experiences! On top of that the popularity of mainstream video gaming has moved the image away from being a nerdy awkward anti-social taboo, to being something that everyone enjoys and is nothing to be ashamed about. After all, most of the richest young people are "nerds" themselves!

Twitch has also been a huge platform into making not only playing games more acceptable, but also watching people play games popular. Esports has grown so much because of it, and that has opened more doors to allow for places to cater to this audience too.

Unlike Namco and Las Vegas Arcade, this is a much less polished style, located in an industrial estate in an old building. Once you get over that, for £7 entry (on weekdays and £10 on weekends), you can play as much as you want. All the arcade games in there are on free to play. There are also consoles out for hire as well. The variety is mostly beat em ups, and some dance games, with some shoot em ups too. 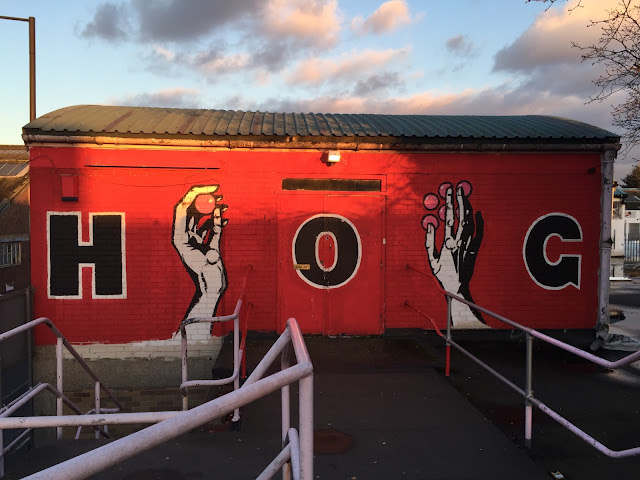 My friend commented that it did have a feeling of the abandoned arcade location in the TV Show Mr Robot, which was true. But us going mid week meant that we were the only ones there at the time, which probably added to that feeling.

Peckham used to have a reputation for being a rough area, but now its more trendy. Admittedly I haven't been to this place, but I have been to some JoyPad Events (see below) so I can only assume it would be similar. 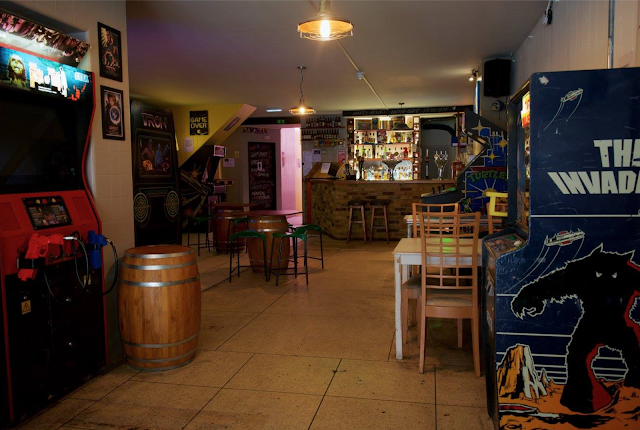 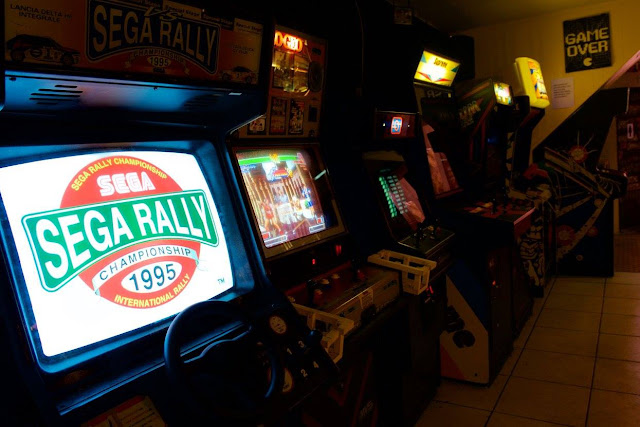 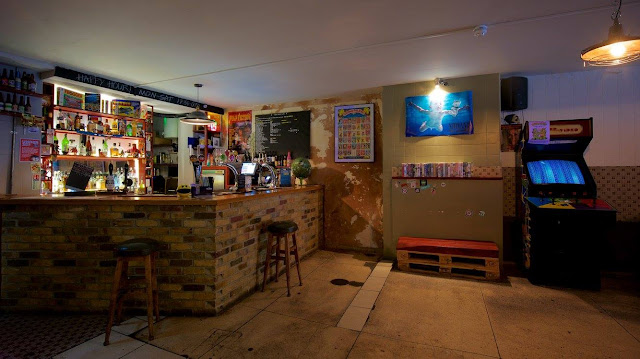 Having a bar with old retro arcade games and game themed drinks combines nerds with drinking, which cant be a bad thing! I cant wait to check it out next time I'm down...

This place has more of an eSports feel to it, with eSports games being shown on the screens. To say this is a traditional converted pub is not understatement, it really is that exactly. Wooden bars and stools around, pints a flowing! 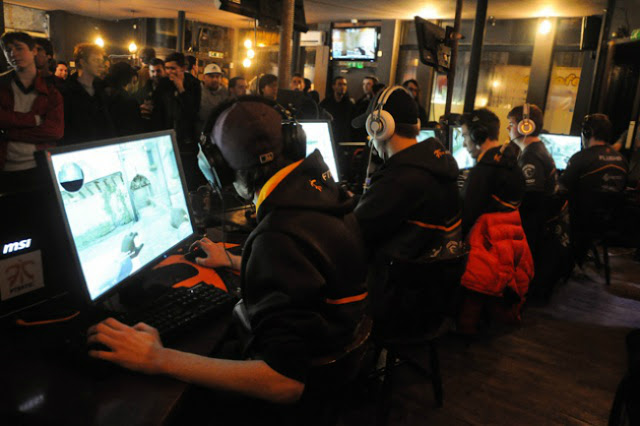 On top of the tv screens streaming from twitch, there are a few computers around with mirrored screens so that you can watch people play from the other side. I'm pretty sure on certain days there are local leagues and competitions for League of Legends, Dota, Starcraft and Hearthstone. 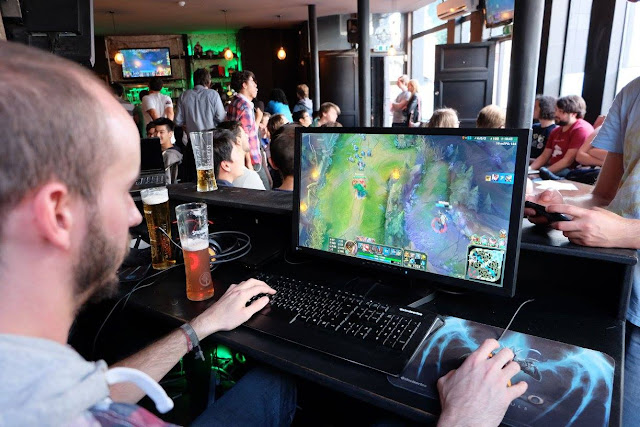 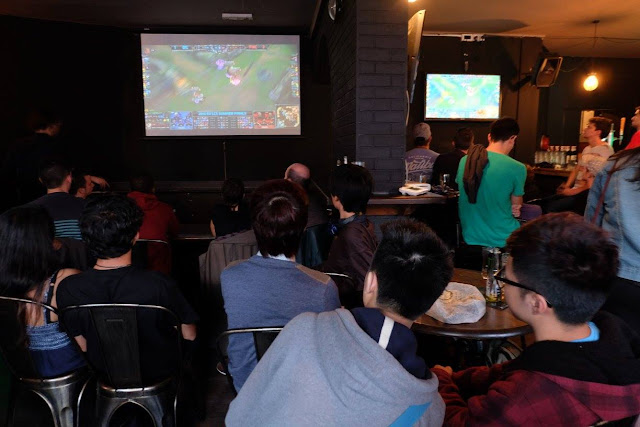 I think that this is going to be an expanding eSports bar brand, since I know there is another place in Paris that is named Meltdown too.

I've been to two of these events, both where in the Shoreditch area if I remember correctly (Old Street/Hoxton Station) and both were great fun. 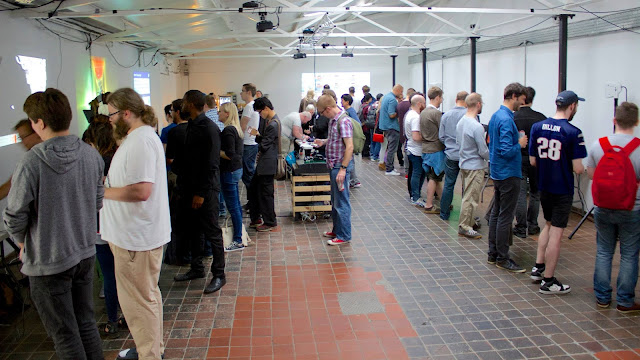 It basically is a more relaxed clubbing night, where you can drink and play games around the venue, drink and dance to video game music. Both times had some games in development and they used the night as an opportunity to test them out on players before releasing them. 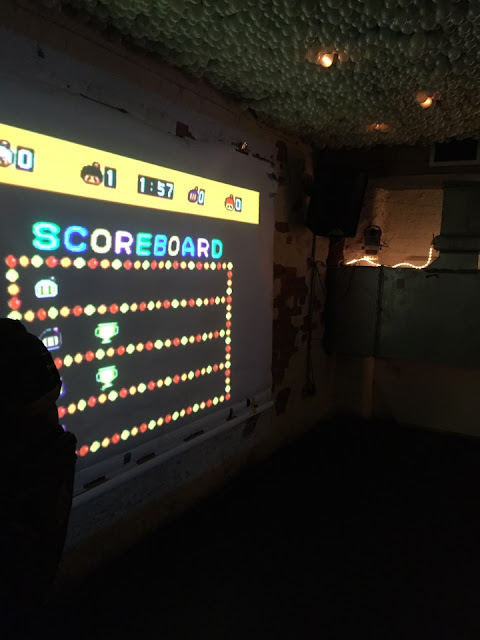 One of the highlights is the 8 man bomberman on the big screen bringing back memories of playing round my cousin's house when I was a kid. Absolute mayhem! Another highlight was a DJ playing live that made one of the soundtracks to an indie game called Super Hexagon called Chipzel. I would recommend signing up to their email listing/facebook group to check out when their next event is happening! 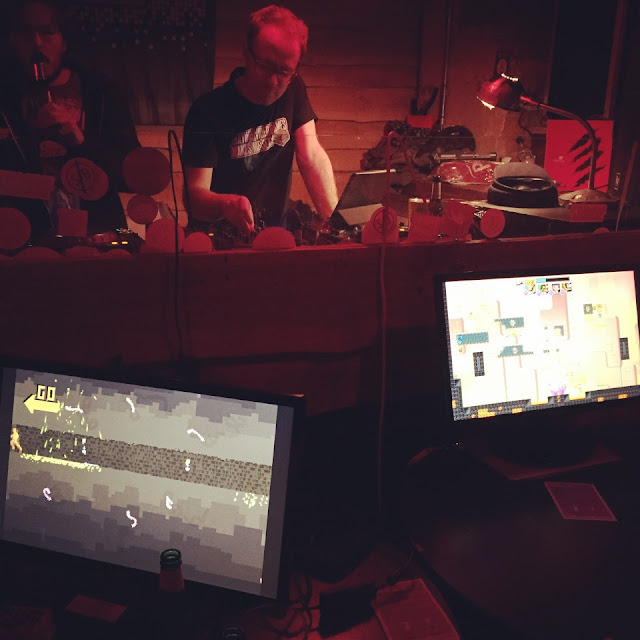 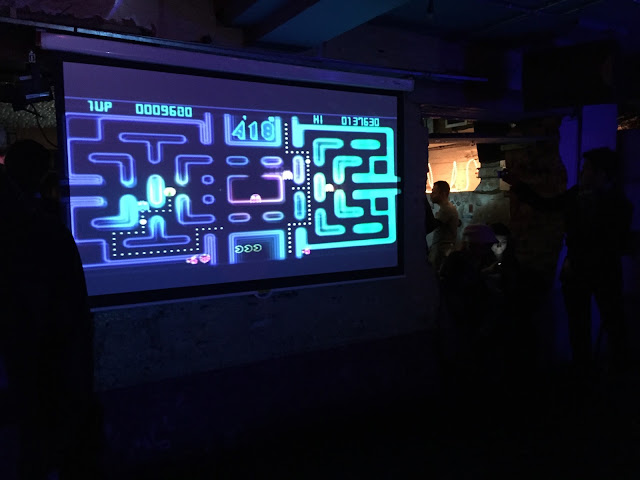 Madd Cafe was one of my favourite places to hang out. It sold cakes and smoothies, then you can go in and rent out a console or go downstairs and play on their old skool arcades. Located in Soho as well, I do remember saying a lot how on earth this place managed to survive in such an expensive location. Apparently the owners were passionate to create a place and money didn't matter too much to them. However, after a while it must have, as it closed down. :( 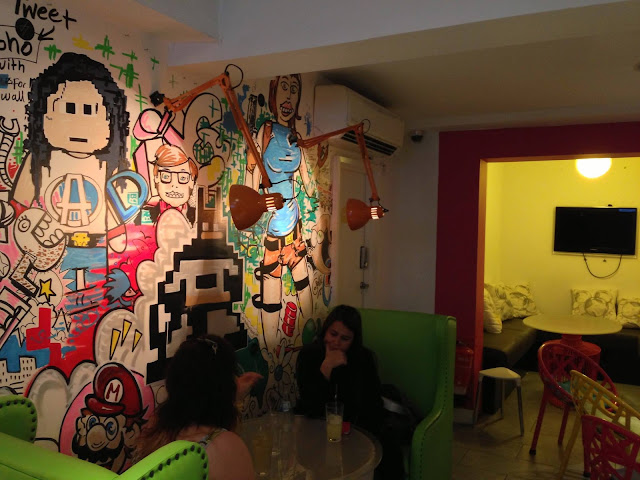 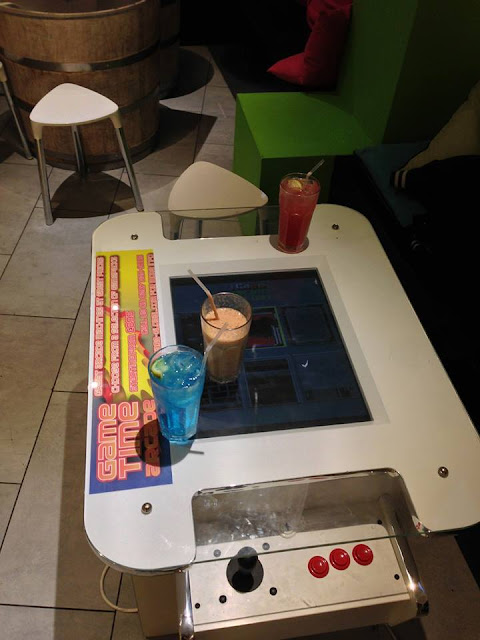 This is not quite video games, but a board game cafe! I remember that these are quite popular when I was visiting Seoul, and we talked about whether it would work in London. "No way", we concluded, "everyone would just nick all the pieces!"

Well looks like this place proved us wrong. As its so popular you have to pre book in advance to get a place. I haven't been to check this out yet, but it seems like its popular and thriving. 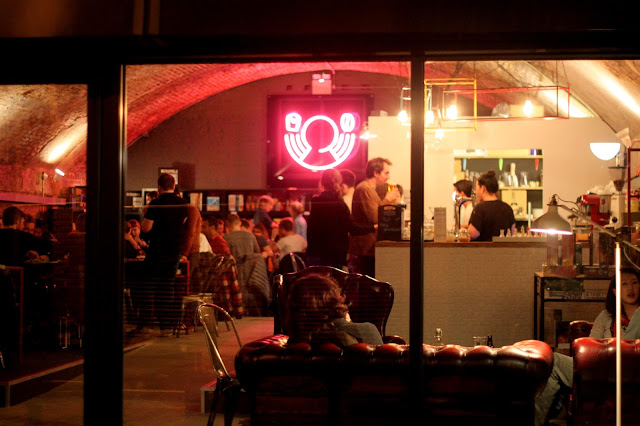 London really does seem to be the creative capital of the world. If you have an interesting idea and the money, London is the place to set it up. There is so many ideas and places trying things out, how can London be boring? I really enjoy showing my friends around and also checking out new places myself! If your visiting London and interested in these things, I hope this blog will help you out!
- January 17, 2016