The next day I managed to meet up with my friend who is the bride of the Wedding! We'd been friends for ages and I had met her in London. It was really good to catch up and get some Korean BBQ. I didn't think that she'd be able to hang out with me before the wedding, since she would be understandably busy juggling the planning of it, as well as looking after both in laws (gulp!). So good to see her!

Afterwards we grabbed a coffee and had a special ice cream on the way there. This brand is very popular, called "SoftTree" I think? Its near Sinsa Dong Garosugil district, which recently has been becoming a more trendy area to hang out. Its like a very buttery rich tasting Ice Cream, quite different to what I had expected, and to top it off they put a piece of real honeycomb to it! So nice... but like my friend says, its probably too rich to be able to eat a lot of!

Later on that night we met up for a meal at some "interesting" American/Korean fusion. There was like fruit pizza (not bad!) and mini burrito things! It was also a pretty cool time to check out Gangnam area once more!

Most of Seoul incorporates an American grid system where Metro Stations are within the high streets, and then they have more back street areas. What amazes me is the fact that in most streets, there will be the similar, if not the same type of restaurants, like Korean BBQ, or Broth Soup or like Fusions, and yet they all seem to survive despite rivals being right all over the street. I guess it just shows the demand of food that Koreans, old and young enjoy to let all these businesses seemingly thrive equally. 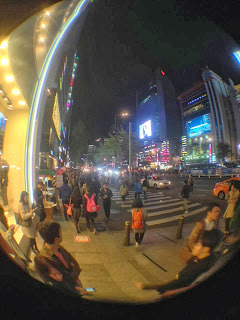 
One of strange things that has happened to me is that I seemed to have made more Korean friends then Chinese (I'm Chinese btw lol). So visiting Seoul was a great chance to catch up with some more friends that I had met in London during my Uni Days.

We met up in Itaewon, what is now a more trendy area, but known mainly for the fact that it is a more "international" area where foreigners hang out. This is because the American Army Base is held here, and so the area adapted more to it.

We ate a more "expensive" Korean BBQ this time, but the place specializing more in steak! It was really good... and interestingly enough it was the place which my friend used to live in before they left and it got renovated. Not a lot of people can say that they're not disappointed with the outcome of a place they get kicked out of!


Makgeolli is like a Korean Rice Wine type drink, which is slightly sweet. Its pretty good! There serving in a bowl is like traditional way of drinking it, and as traditions go, the youngest usually serve the oldest. Notice also that there are pretzels in the other bowls, its pretty typical for Korean Bars to provide [unlimited] snacks and pickles to their customers to help them not get drunk so fast!

My friend is very nostalgic about London, so he decided to take us to his favorite "Pub" attempt and being English! Not bad... but just way too clean to pull it off in my opinion! However, it did get a very local English drunk guy talking to us randomly afterwards which I'm sure he appreciated! =D