So if you hadn't realised in my previous posts (or maybe I hadn't posted it, I cant remember), I had decided to take 2 weeks off for some travelling i.e catching up with some old good friends. The plans is to go to Seoul, Korea for one week and Hong Kong for the other.

This wasn't a random decision thought, it was actually because one of my best friends was getting married, and had invited me to her wedding. Back in my London days, we had a pretty awesome super chilled, procrastinating, bad influence on each other kinda group. So when she invited me I didn't think twice about it, and also thought that I might as well go to Hong Kong as well whilst I'm "in the area".

So right now I'm blogging in Hong Kong, I arrived last night. The flight from Seoul to Hong Kong is only like 3 hours but I was pretty shattered. Apart from the fact I had to sit next to a kid (bad beat) on the plane, it was an ok flight.... although I did start watching an 18 cert movie then things kinda got awkward so stopped. I'm pretty surprised they had 18s!

I arrived in Seoul after a faster then expected journey of 10 hours in the plane. Apparently they have a faster route now where they fly over Russia instead of nearer the equator over India and China.

With quite a lot of "plane" experience (I was gonna type in flying experience but that makes it sound like I'm flying the plane lol), I came super prepared;
That being said, Korean Air is pretty good and even had USB slots at the back of the chair which I thought was a great idea. Other airlines should pay attention! Cant be that hard to install eh? There was even a plug underneath my seat (which I didn't even use in the end), which seems to be unheard of in economy seats. 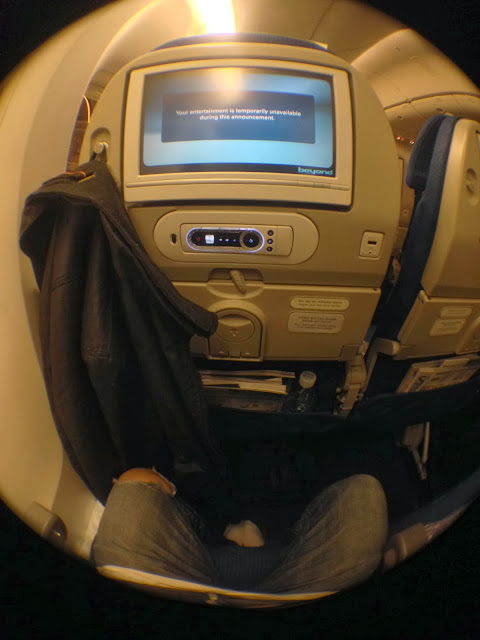 This is my 3rd time in Seoul so by now I have a pretty good idea of what to expect. Arriving in a country you've never been before can be kinda scary. But since I've been here a few times I kinda knew what to do. Usually the best thing to do is to ask anyways, especially at the airport they will have people that speak English.

First thing I did after coming out was to get a phone. A phone? Yes... a phone! I have absolutely no idea why other airports around the world don't do this, but as far as I know Korea is the only place that I have ever seen an airport mobile phone rental contract. The phone charged me 3000 won per day ($3 or £1.75) and of course there are local/international call prices added on. However, if you lose or damage the phone you will be charged like £200, so be careful with it!

After getting the phone, I asked the info desk about which bus to take. You can take the train to Seoul but its actually cheaper and more convenient to take their shuttle buses. This is because there are quite a few of them and a lot of them can take you right to where your place of stay is. The 45 min drive (depending on traffic) on a pretty nice coach cost 15,000 won (£8) and mine was the first stop.

I had booked a hostel place on expedia, and it wasn't the typical studenty style hostels I've been to before. This was an apartment with multiple rooms and each room had en suite shower too. My room was kinda small, the bed took up half of it, but I didn't mind at all, considering I wasn't really going to be there that much anyways.

Despite the non troublesome flight, I had actually barely had any sleep at all. Unfortunately by the time I had got to my room and everything it was 6pm... I had to stay awake otherwise my sleeping would be completely fucked. So I had an idea...

GSL is Global Starcraft League, and if you have been following this blog you should realise that I absolutely love Starcraft!

Koreans are the best players in Starcraft and since this league started in 2010. There have been no less then 20 tournaments run and since the invention of online streaming its popularity as soured. What is great about the GSL is that its free to go in and watch Starcraft games! So with some hours to kill I looked up where it was and headed down!

After walking waaaay too many blocks then I should have I got there. I actually got off a stop too early thinking that it was Samseung but it was Seoulleung. So confusing! Not only are nearly all the names similar but look at what the metro map is like!

Anyways I finally got there and was able to see one game only lol! Better then nothing eh? It was a Terran vs Zerg match, Fantasy vs Sleep! Haha I just realised that I really needed sleep during that period... wow. Anyways the Terran won and qualified for the next season. In the GSL they have like the premier league and the challenger league, kinda like in sports when there are promotions and relegations.
There wasn't that many people there that night, but it was still pretty cool to see. I didn't manage to catch the casters Khaldor and Wolf that night unfortunately as they ran off quite quickly afterwards.
The main room kinda looks like a theatre room, its all black and has black curtains behind. There is one big screen in the middle showing the stream, inbetween the two booths where the players are. The audience sits in the middle of the room, and there are two flatscreen monitors on the sides too. At the back of the room are two camera cranes, and behind that is a balcony where the casters sit, but facing backwards!