A Touristy Visit to Prague!

Last week I went to take a break in Prague. Jumping in before those Brexit prices go up, we hopped on an EasyJet flight and found an apartment for 200ish Euros for 3 people for 4 nights on booking.com!

I actually haven't had a proper holiday in about 2 years, and I decided that I might as well. I'll try to make this post helpful to you guys if your thinking about going, as well as my general observations of Czech culture! Hopefully if there are things I pointed out that aren't to my taste I don't mean to offend you helpful Czech dudes!

Literally took about 5 minutes on Tiltbook for some helpful advice. Thanks guys!

So from the Airport we took a bus (no. 100 I think) to Zlicin so that we could Metro it into town! The journey took like 20 mins, and we bought a ticket from the helpdesk for around 100 crowns, so 36 crowns per person for a "90 minute" ticket. This allowed for unlimited journeys for 90 minutes for tube and bus as far as I know.

We worked out that 30 crowns is 1 British Pounds, so that's pretty cheap! But then again, we're from Britain so almost anywhere outside of our expensive country would be considered cheap!

Once at Zlicin, we went to our apartment based in Andel which conveniently was on the same line. Not that the Metro is that complicated, especially compared to London, there are only 3 lines. We found our apartment after some google mapping and possibly an expensive phone bill later on. Our place was on top of a hill... on like the top floor... 8 flights of stairs! What exercise!

Our place was not bad for the price, but had some defects with the kettle lid not shutting, very important for us Brits and our tea, and a window to the small terrace that wouldn't shut properly. But nonetheless, the view was pretty awesome.

Armed with Lonely Guides Handbook which my sister brought, first thing we checked out was The Prague Castle. It is the largest "ancient" castle in the world according to the Guiness World Records occupying an area of 70k m squared! 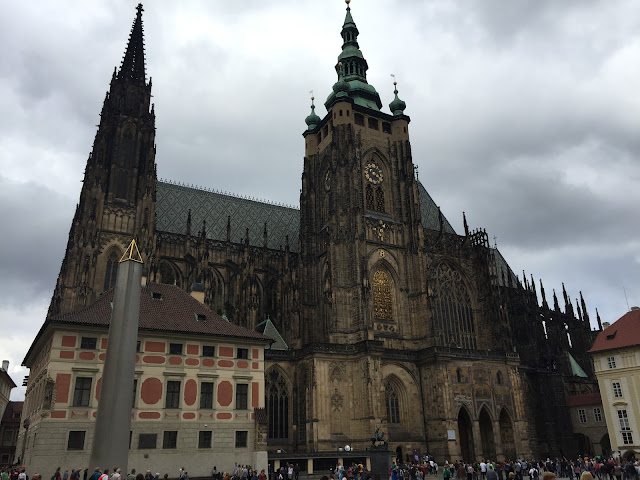 The castle is divided into many different buildings and sections that you can visit. However you have to buy a ticket and different tickets gave you access to different areas. Even when we got the higher tier ticket which was 300 crowns, we found that this still didn't give us access to all areas, there were some places where you still had to pay! So beware!! 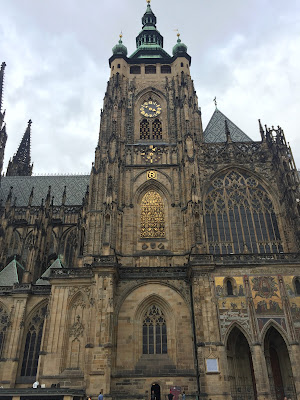 Another thing to note was that on the back of the ticket it gave you a map of what was where. Well... loosely. The numbering of buildings in Roman numerals didn't help either lol. But either way, the whole area is quite awesome, showcasing that European style of architecture. 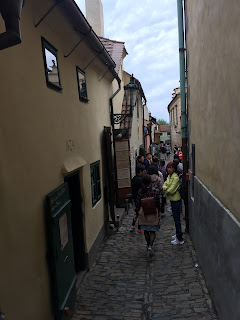 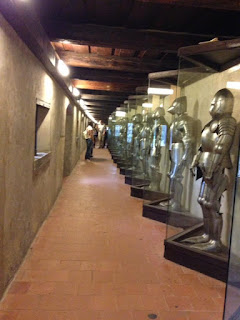 Honestly as sad as this sounds, looking at this I really cant stop thinking about the new map released on Overwatch, which is based in Germany. But it still feels like the developers did their research in trying to get that European style of architecture!

Just like London, this city also has a river running through it. And with that comes some amazing bridges. It does seem that the river here is wider then the Thames and has many smaller canals running off it, as we see various dams and water control around.

Of course, this being the more touristy areas there are vendors selling things all over the place. There are blackened statues of Saints on the bridge, and some have sections still in gold. The most notable one being St John of Nepomuk, which has a section of it in gold and touching it will bring you good luck. But then again, its a skill game so we don't need luck right?

The Old Town is like the tourist square of Prague. Again, vendors are everywhere and tour guides try to rip you off with horse/weird looking car rides. In the main square is the Old Town Hall, and on it is the famous Astronomical Clock erected in 1410 making it the third oldest working one in the world.

We got there close to midday and decided to stay for to see the chimes and the excitement there was palpable. But this excitement turned into disappointment pretty quickly as all that happened was that a small door opened and some small figurines went past them. It was quite a funny moment actually as it was completely packed. In some ways its a bit of a shame because it took away from the beauty of the clock itself...

One of the more niche places we found was the Brewery called "U Fleku".  We took a tour for 100 crowns and it really shows when a guide really loves showing people around. In the garden is a devil painted on the wall. It is said that this is a test to see whether you've drunk too much. If you see a dancing devil or more then one, it was time to go home! The beer is brewed and only served there and people travel there just to try it. 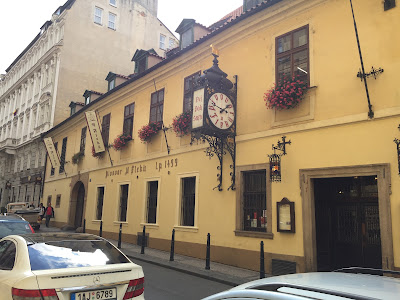 After the tour we got some food at the restaurant there. It really did have an Asterix & Obelix feel to it, as waiters would walk around with trays of pre-filled glasses of beer and shots around to hand them out, as well as a live accordion player!


Afterwards we went to the Jewish Quarter and took a tour. This is one of the most expensive tours in Prague, priced at 380 crowns but it is quite an in depth and informative one, so if historic stuff floats your boat its quite worth it. 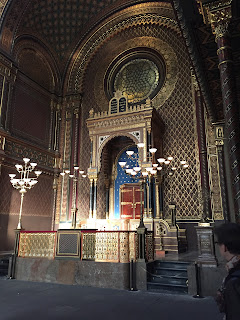 
Of course I'm sure there's loads more to see, we also visited a National Park and walked around a lot. A touristy holiday can be quite exhausting if you want to see all the sites. I really love to panoramic the shit outta my iphone lol. This was a nice break, but I do prefer visiting friends that want to show you why they love their city.

Anyways, hope this is helpful if your wanting to check out Prague, its a very beautiful city! 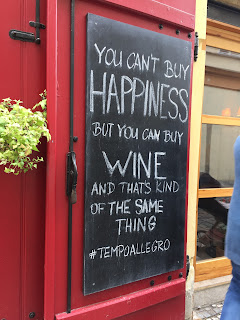